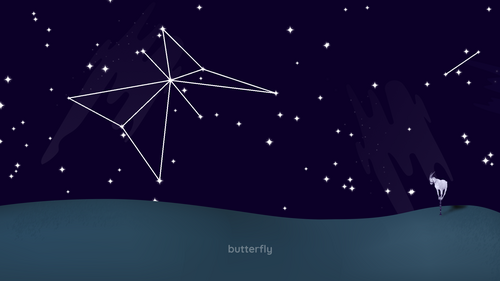 After doing several Ludum Dares and other online jams, but never being satisfied enough with my output from any of them to publish it, I swore off game jams in general. A friend kept recommending I do TOJam, though, and it had at least one major difference from other jams I'd tried: A physical venue.

Maybe a physical venue would make a difference. Maybe I'd be less distracted with so many people around me also working on the jam. Maybe I'd see other people doing creative things and get more inspired. Maybe I'd get the chance to meet people there, and at least do some networking even if my project fails.

It did make a difference, and I do feel better about this jam than any of the others I've done before, but it left me exhausted, and it'll likely be some time before I consider doing another.  Even then, I'll have to change how I organize my time to avoid my tendency to just keep crunching.

This post is a mini postmortem of the project and the jam in general.

How does Stargazing fit the jam theme?

In the past, I've treated jam themes very literally, implementing them as mechanics. I've found that this turns into a trap for me, as I focus on the implementation of the theme to the exclusion of my own creativity. This time, I decided to do something different, and think about the theme less literally. With the theme being "winning is for losers", I arrived at the idea of games that aren't about winning or losing in the first place; meditative games with a focus on player expression. Luc Palombo, my 2d art floater, was on board with that plan, but it wasn't until the morning of the day before the jam that the idea of stargazing and drawing constellations started to form. It was able to hold my attention throughout the morning and seemed small enough to be doable. I pitched it to Luc, and he seemed to like it, so we settled on that as final.

What were the anticipated risks, and how were they mitigated?

What got cut from Stargazing?

I was really glad I'd taken an extra day off to recover from the jam. I was exhausted, and I didn't fully recover from it until the end of the week. I had no energy, neither physical nor creative, left, but still had work to do. Submitting the game on itch.io and setting up the store page. Fixing some bugs discovered during the after-jam open house. Making the game work well for streaming and screenshots (print screen wasn't working in fullscreen modes, and I wanted people to be able to manually take screengrabs of their constellations even though I'd had to cut the built-in functionality).

What did I get out of doing the jam?

What did I learn from it?

Bonus: What other games left an impression on me during the post jam showcase?

There was also a project that stuck out from the submissions I tried during the week after the jam:

Relax and draw constellations in the stars.